This last year can rightly be described as an annus horribilis for Bradford City AFC but one that will soon be forgotten. Thankfully there is little prospect that our bad run will continue and after another encouraging performance today we can look forward to the new year.

Up to and including Saturday, 29th December we have had only eleven wins in the Football League in the last twelve months. The statistics for the calendar year are lamentable. From the 21 games played in the latter part of the 2017/18 season there was a points tally of 18, derived from four wins, six draws and eleven defeats. And of the 25 games in the current season we’ve managed 24 points from seven victories and three draws. In aggregate, 42 points from 46 League games played in this calendar year amounts to relegation form. For that matter, if the second half of this season yielded the same as the first we’d only have 42 points and twelve wins on a pro-rata basis over 2018/19.

Compare these statistics to previous 46 game campaigns and there have only been two seasons when we’ve done worse – the 36 points in 2003/04 (2nd tier) when we managed ten victories and six draws and the 41 points in 1989/90 (2nd tier) when there were only nine League wins – and not surprisingly both were relegation seasons. On a calendar year basis however, 2018 witnessed the lowest points record for a corresponding number of games (ie 46) from 1st January to 29th December inclusive – it really has been that bad. It speaks volumes that there was such a breakdown in the second half of last season and that it could not be put right in the summer.

There was a similar phenomenon in two recent relegation seasons. In 1971/72 (3rd tier) and then 2006/07 (3rd tier) there was a collapse in the second half of the season. Taking three points for a win to provide a like-for-like comparison, in each case 65% of the total points came in the first half of the season. Yet in 1932/33 (2nd tier) the collapse was even worse, with 73% of the total points coming from the first 21 fixtures in what was a 42 game season (40 points out of 55).

In 1909/10 there was a similar collapse with 66% of the points having been secured in the first half of the season. In fact at the half-way stage, at the end of December, 1909 Bradford City sat at the top of Division One having managed 12 wins, three draws and only four defeats out of the first 19 games (39 points based on three for a win). The second half of the season brought 5 wins, 5 draws and 9 defeats (20 points). Yet City finished 7th, still a credible achievement. What prevented relegation in 1910, 1933 or 2018 was that the club had accumulated sufficient points by the half-way point and what each season had in common was that the club had aspirations of promotion at that stage. In 1909/10 there was probably an attack of vertigo at the possibility of sustaining a title challenge, all the more remarkable for the fact that the club had only secured its place in the top tier in the last game of the previous season.

Recent performances have been sufficient to instil the belief that the second half of this season will prove much more fruitful. Today’s emphatic defeat of Rochdale demonstrates that ours is not a team nervously fighting a relegation battle. I am not alone in the belief that we have the makings of a ‘Great Escape’ to emulate what has been achieved historically. Certainly the players now have the self-confidence and belief that is a vital pre-requisite.

What then are the precedents? Four seasons in particular stand out for a recovery in the second half through which relegation was avoided. In 1935/36 the club managed a remarkable second half turnaround to avoid relegation to the third tier and 38 out of 58 points (66%) were secured after the halfway point of the season (NB 42 game campaign, points restated on the basis of three for a win).

Another celebrated escape was the club’s first ever season in the first division in 1908/09 when safety was assured with victory in the last match against Manchester United a few days after that club had defeated Bristol City in the FA Cup Final. (In a previous feature I have described how the bantam identity was adopted by Bradford City AFC at the end of November, 1908 to inspire a turnaround.) In that season, 28 out of 46 points (61%) were secured in the second half (NB 38 game campaign, points restated on the basis of three for a win). 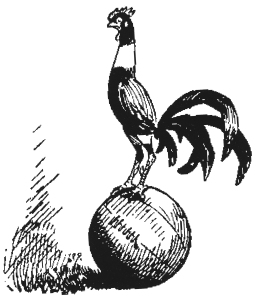 More recent examples were in 1964/65, 30 out of 44 points (68%), a recovery that allowed the club to avoid applying for re-election and then in 1986/87, 36 out of 55 (65%) that ensured the club avoided relegation from the second division – in the latter case a transformation that was kick-started with the return to Valley Parade from Odsal. (The photo below was taken by myself in December, 1986 when an England XI played against Bradford City to celebrate the homecoming.)

On the other hand, there were notable improvements in the second half of the 1926/27 season (18 points compared to 12 points in the first half of the season; equivalent to 60% of the total achieved in the second half) and in 1948/49 (24 compared to 15; 62% of the total) but these were insufficient to avoid the ignominy of finishing bottom of the division in each case.

Three other seasons are remembered for the avoidance of relegation when it seemed almost certain earlier in the season. What happened in 1983/84 following the return of Bobby Campbell (photo below) from Derby County is perhaps the best remembered. After fifteen games the club had managed a single win and five draws but then followed ten successive victories and an unbeaten run of 16 matches that yielded 40 points alone. By the end of January the club was already well clear of the relegation zone – for the record 39 (55%) out of the total 71 points came in the second half of the season.

In 1996/97 the club managed to avoid relegation on the last day of the season even if statistically what happened in the second half of the season – 26 out of a total of 48 points, equivalent to just 54% – was less impressive.

Likewise in 1999/00 when Premier League status was safeguarded on the final day of the season, the points yield in the second half of the campaign was not that much greater than in the first and amounted to 53% of the total 36 (19 points in the second half compared to 17 from the first 19 games).

Equally significant as the second half recoveries that occurred in 1908/09, 1983/84 and 1986/87 was what happened next. The boost to confidence and self-belief from escaping relegation translated into much improved form over the course of the following season. The exception to this however was in 1937 when City were relegated and in 1966 when the club could not escape being forced to seek re-election to the Football League despite the achievements of the previous campaigns.

To manage a total of 55+ points this season should be sufficient to avoid any prospect of relegation and in so doing, 2018/19 would be remembered as one of the most impressive second half recoveries in the club’s history. How feasible then to secure 31 points from the remaining 21 games and get wins in every other game (the equivalent of promotion form)? In 1986/87 the final 21 games yielded 36 points and in 1983/84, it was 33 points from the last 21 fixtures. 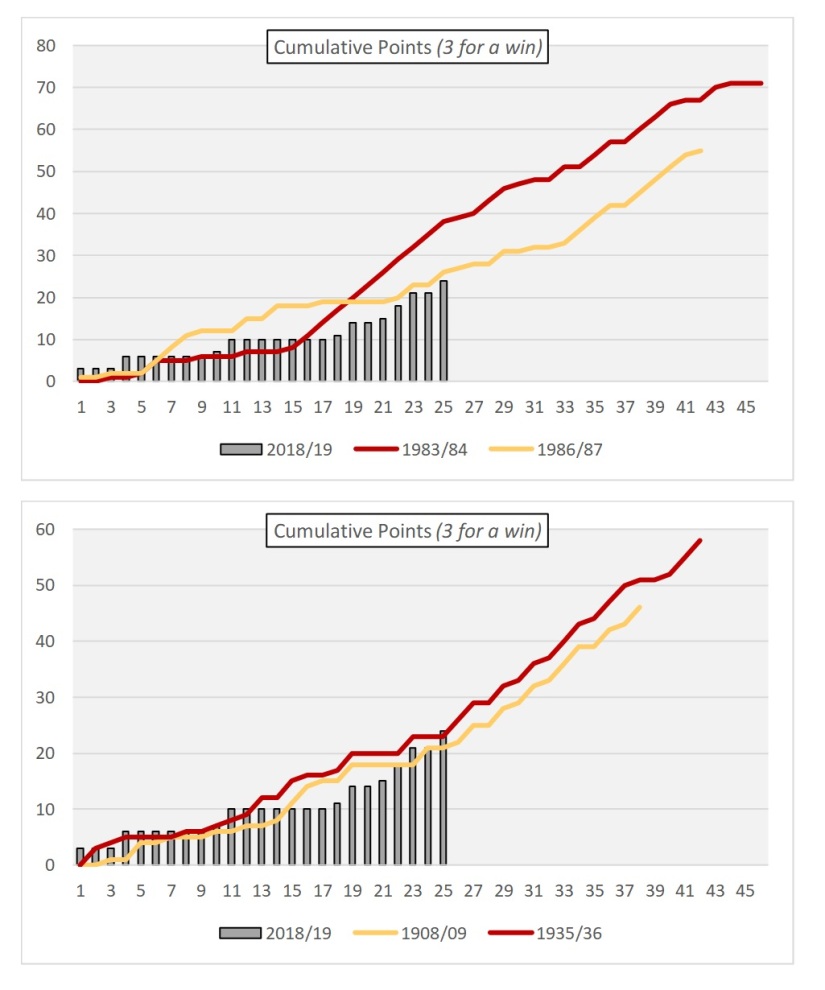 What happened in 1983/84 (at this divisional level) and then in 1986/87 (at a higher level) – during the original era of so-called Bantam Progressivism between 1981-88 – provides inspiration that a Great Escape is possible. It also allows the current playing squad its opportunity to make history. If ever there was a time to be reminded of the origins and relevance of our bantams identity, this is it.

All told it will be an intriguing end to the 2018/19 season, a campaign that many of us had virtually written off just eight weeks ago. Fast forward to 2019!

Thanks for visiting my blog. You will find links below to other features I have recently published online about the history of football in Bradford and Bradford City in particular. I contribute to the BCAFC match day programme and you can find links to my features from the menu above.

The following are other features on this blog published during 2018:

Photos of Valley Parade in the 1970s

My most recent articles published on VINCIT include:

Details of my books published in the BANTAMSPAST HISTORY REVISITED SERIES