How and why Bradford City came to be called the Bantams… and why the identity is equally relevant today.

My column in the BCAFC programme v Rochdale, 9 December, 2017:

One of the most common questions asked about the history of Bradford City is how we came to be called ‘The Bantams’. Pictured below, matchday mascot ‘Billy Bantam’.

If you go back to the nineteenth century, the nicknames ‘Valley Paraders’ and ‘Paraders’ were frequently used in press reports from around 1890 to describe Manningham FC. During the early history of Bradford City the club was variously referred to as ‘The Citizens’ and ‘The Paraders’ but all of this was the product of journalistic licence as opposed to any attempt by the club itself to encourage nicknames.

After promotion to Division One in 1908 it was considered appropriate for the club to follow the fashion among other leading sides and adopt a nickname. The suggestion that the club needed a new good luck charm to replace a lost silver horse-shoe – and that it was the idea of (club director) Tony Fattorini’s daughter – makes it seem that the choice of a bantam identity was almost accidental and arbitrary.

On the contrary it was a calculated branding strategy by Fattorini, one of the leading sporting goods entrepreneurs of his age. The characteristic of bantams as small but fearless fighting creatures suited the self-image of the club and typified its personality. Manningham FC had always considered itself as a challenger to much bigger sides (in particular Bradford FC at Park Avenue) and Bradford City had inherited the same sense of being an underdog. As the club struggled to consolidate in the first division, the notion of bantam fighting spirit was equally motivational for players and supporters alike.

The origins of the ‘bantams’ identity can thus be traced to November, 1908 and the timing at the end of the month came when Bradford City were adrift at the bottom of Division One with only one win out of 13 games. Introduced for the fixture with League leaders, Everton at Valley Parade the bantam identity proved totemic and inspired a recovery: a draw with Everton was followed by two successive victories at the beginning of December.

In the context of the age, a bantam metaphor had a cultural resonance. For a start, bantams were popular show birds and thus well-known at the time as attractive yet fierce birds. People were also familiar with the practice of journalists – and newspaper cartoonists – portraying two competing sports teams as animals in combat. Even if the practice had been outlawed since 1835, covert cock-fighting contests still took place. In other words, the symbolism of bantams as underdog fighters would have been understood.

The naming of the club in this way captured the imagination of the City faithful, no less the players who managed to avoid relegation on the last day of the campaign. The following season a new shirt was adopted by the club with a yoke collar said to resemble a bantam’s plumage – the same shirt that was worn when City won the FA Cup in 1911. Nevertheless the club continued to be referred to as the Paraders or the Citizens in newspaper reports with a bantam representing more of a totemic mascot.

The club’s handbook for the 1909/10 season similarly featured a bantam on its front cover and the drawing was based on a Staffordshire breed descended from a fighting bird that was popular among bird fanciers. 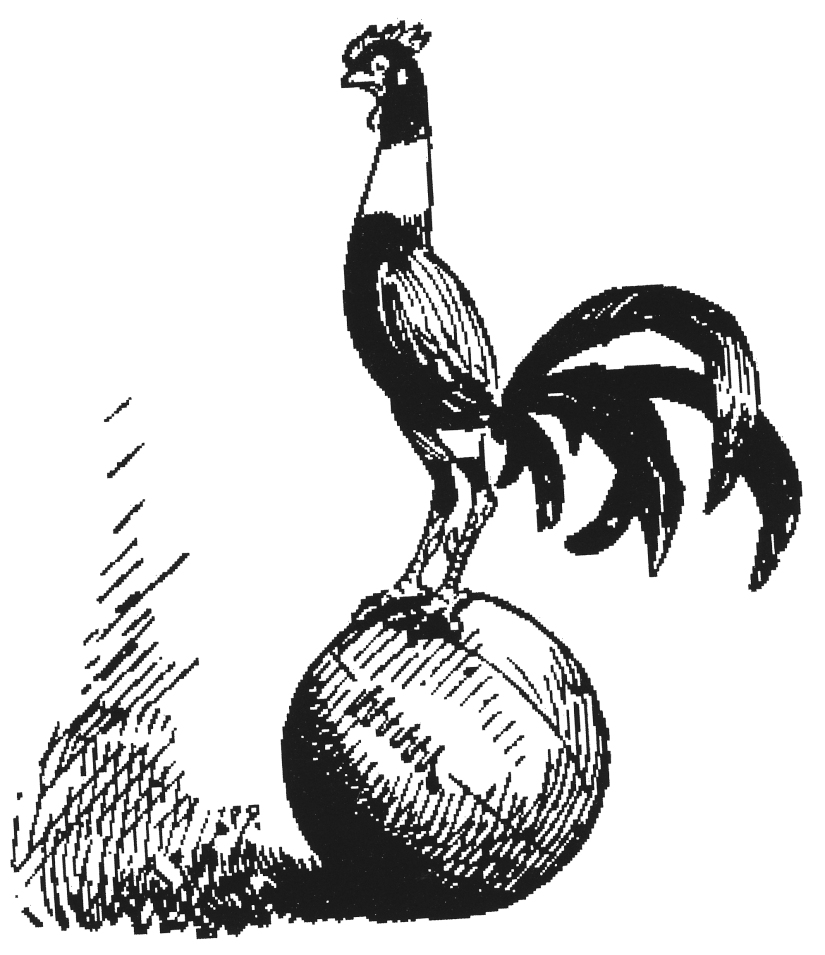 Although hens were known to have been kept at Valley Parade in earlier years, there is no record of the club having adopted a live bantam as a mascot. Nevertheless, there are reports from before World War One that refer to bantams being taken to games by supporters. One example was in February, 1909 when a ‘dummy bantam’ was put on the crossbar at the Kop End during the half-time interval of the FA Cup tie with Sunderland. It was reported that this remained in place for the second half and a week later when City visited Roker Park for a League game, a bantam was released on the pitch.

The bantam identity inspired a new playing shirt at the beginning of the 1909/10 season, as later worn in the 1911 FA Cup final. Note the resemblance of the yoke on the shirt to the bantam plumage. 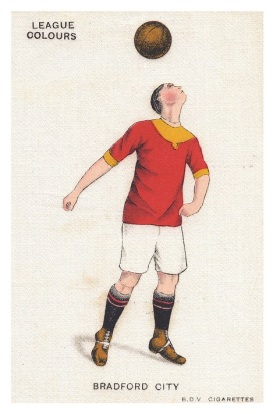 Read more about the origins of the different crests adopted by Bradford City AFC in my book A HISTORY OF BCAFC IN OBJECTS.

Other features on the BCAFC identity:

If you are interested in Bradford sport history visit VINCIT: https://www.bradfordsporthistory.com

1 thought on “The origins of the Bradford City nickname, ‘The Bantams’”