My column in the BCAFC programme v Burton, 21-Aug-18

A highly collectable enamel badge is that produced by the Bradford City Supporters and Shareholders Association in 1949 that features a bantam atop a football. There have been many different depictions of a bantam with regards to Bradford City AFC but arguably the 1949 badge was one of the best, albeit the same design as that associated with a motorbike. The design has been revived this year to depict Claret & Amber membership at Valley Parade.

The bantam identity had been revived in 1949, to all intents and purposes as a rallying call to turnaround the club. Whether or not it was the catalyst, in 1948 the Birmingham Small Arms (BSA) company had released its Bantam lightweight motorcycle which became a market leader. It was not coincidental that the bantam character which featured on the new BCSSA badges in 1949 was a close replica of the BSA Bantam marque.

The most prominent use of the new identity was its adoption as a badge on the home shirt during the 1950/51 season. The design was a bantam in a shield and it was the first instance of the club wearing a unique shirt badge other than the Bradford coat of arms. From examination of surviving press photographs it was originally worn in October, 1950 but this was not continued beyond the end of the 1950/51 season which seems bizarre. Whether this was for practical reasons (i.e. shirt laundry, the quality or cost of the badge) or regulatory (i.e. not the official or registered club crest) is impossible to say.

The bantam identity originally dated to November, 1908 but by the end of World War One had fallen out of favour and newspaper reporters tended to refer to the club as the Paraders. Between 1949 and 1964 a bantam character was used in a number of different designs, principally on club publications but its use was almost incidental. Stafford Heginbotham became chairman in 1965, assuming control when Bradford City was at the bottom of Division Four. Anxious to promote the club and signal a fresh start, the board launched a new identity in conjunction with a programme redesign mid-season and thus the bantam was retired in favour of The City Gent.

With regime change at Valley Parade in 1974, Bob Martin was anxious to demonstrate his own changes and dispense with the City Gent character that had been based on Stafford Heginbotham himself. Martin introduced a new crest, probably inspired by the logo of the incoming Bradford Metropolitan authority but in December, 1981 opted to revive the bantams identity. There were as many as three different bantam designs used by the club in as many years until the bantam identity was ditched in 1985 to be followed by the reintroduction of a civic Boar’s head crest by Stafford Heginbotham (who succeeded Bob Martin at Valley Parade as chairman). Another regime change in 1991 led to another reversion to the bantam identity and indeed the current club crest dates back to that year.

John’s book A HISTORY OF BCAFC IN OBJECTS is on sale in the City Shop. In future issues of The Parader he will feature objects that tell the history of the club. If you have a City artefact in your possession that you would like him to feature or provide background about, contact him at johnpdewhirst at gmail dot com or tweets @jpdewhirst
John has written widely about the history of sport in Bradford: Articles by John Dewhirst on the history of Bradford sport 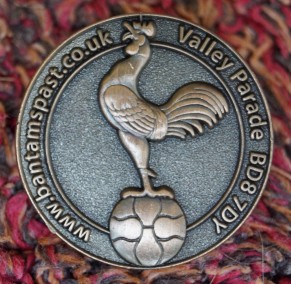