Coventry City is the only other Football League club to have adopted the bantams nickname, albeit swept aside at the time of Jimmy Hill’s relaunch of the club as Sky Blues in 1962. According to Wikipedia: ‘Coventry were first called the Bantams in December, 1908 after the local newspaper noted that they were one of the few clubs who did not have a nickname. Being the lightweights of the Southern League, the Bantams was suggested and stuck with the press and supporters.’

What is notable is that Coventry adopted the nickname only a month after Bradford City. As I mentioned in the Sunderland programme, it came at a time when it was the fashion for clubs to adopt animal and bird identities. However, given that Bradford City chose the nickname because of association with the bird’s fighting qualities, Coventry did so for apparently different reasons.

In 1962 Coventry considered the nickname to be old fashioned and there was a similar decision at Valley Parade not long after. The bantam identity was retained by Bradford City until 1966 when it was swept aside by the City Gent and the restoration of the ‘Paraders’ nickname. In practice the bantams identity had faded with more relevance for headline writers and journalists writing match reports. Apart from featuring in a Bradford City Shareholders’ and Supporters’ Association badge design in 1962, and on the cover of the programme in 1963/64, the bantam identity had become almost incidental. 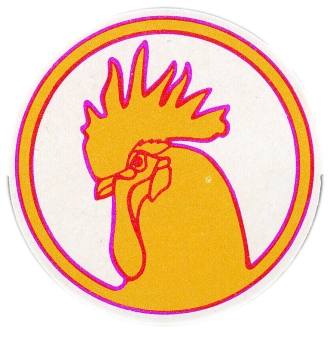 The subsequent bantam revival by Bob Martin in 1981 was more remarkable for the introduction of three different club crests in as many years. Frankly all three designs were poor and bear testament to the difficulty in the pre-internet era of securing a realistic drawing of a cockerel, let alone a bantam cock. The crest of 1982 for example has an abundance of ribbon in the shield as if the designer was desperate to fill the space. Furthermore, if you take into account the relative proportions of the cockerel and the ball it suggests a giant bird that is almost certainly not a bantam.

The circular design was introduced mid-season, in December, 1981 and despite new crests being introduced in 1982 and 1983 this continued to be used on merchandise and in the club programme.

What seems unusual is that despite the rebranding of Bradford City a bantam crest never featured on the club shirt at this time. Instead supporters had the indignity of the TOY CITY shirt advertising. At least in 1983 this was replaced by the Bradford Mythbreakers logo of the Bradford Council’s Economic Development Unit.

In 1985 Stafford Heginbotham revived the boar’s head identity for the club that survived until the introduction of the current crest (below) in the 1991 close season. It seems anomalous for the crest to have a white bantam when the original was firmly associated with claret and amber but that is another matter.

John’s book A HISTORY OF BCAFC IN OBJECTS (vol 1 in the BANTAMSPAST HISTORY REVISITED series) provides background about City memorabilia. It is available from Waterstones, Wool Exchange or Salts Mill bookshops or follow the link below for BANTAMSPAST HISTORY REVISITED. In future issues of The Parader he will feature objects that tell the history of the club. If you have a City artefact in your possession that you would like him to feature in the programme contact him at johnpdewhirst at gmail dot com or tweets @jpdewhirst