Historically the offer of a benefit game was a key factor to secure the services of a target signing. Accordingly players would be awarded with the gate receipts of a nominated (league) game. The post-war practice has been to grant a special testimonial match to a long-serving player, typically based on ten years’ service featuring former players and/or unique opposition. The principle originated from the fact that few players were able to live on their club wages, much less save for retirement. Many of the players granted testimonials at Valley Parade were locals who had presumably chosen to remain in the area rather than seek transfers. In recent years testimonials have been less commonplace, surely a reflection of the fact that there has been such a high turnover of playing staff. The granting of a testimonial to Stephen Darby is a welcome exception. 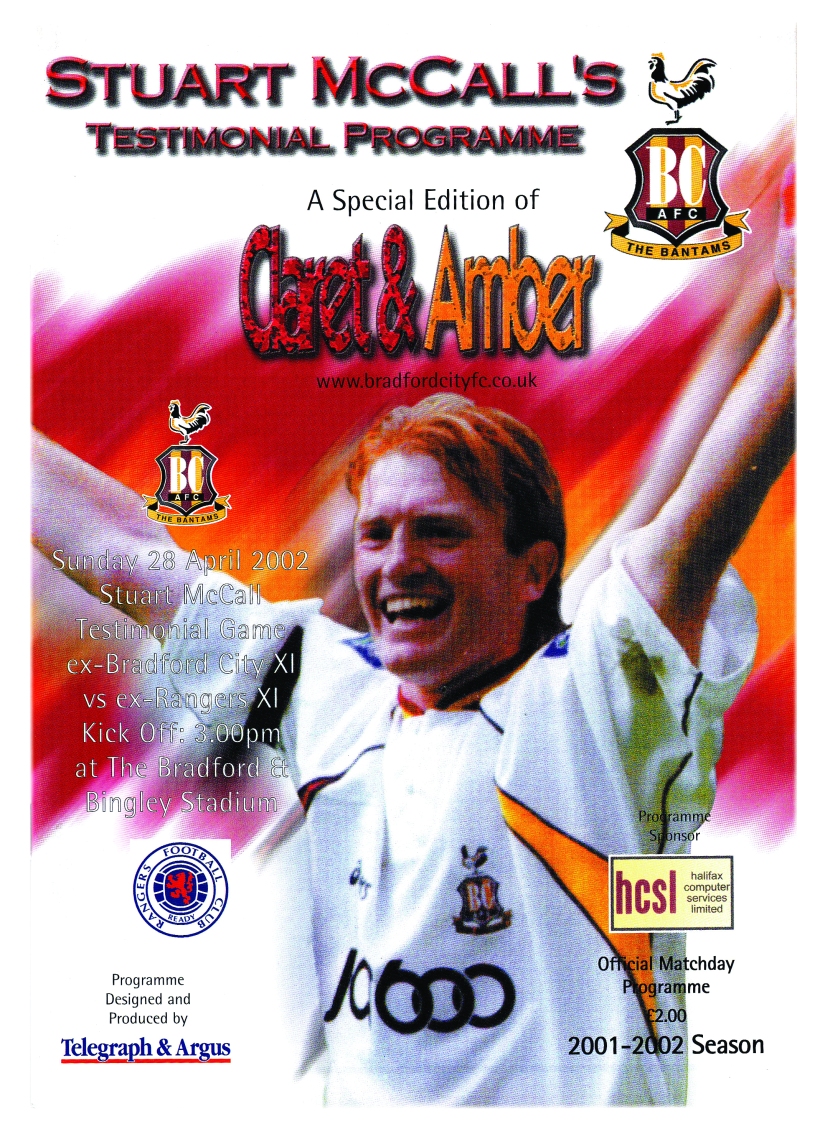 By far the best attended testimonial at Valley Parade (with a crowd in excess of twenty-one thousand) was that of Stuart McCall (April, 2002). On that occasion Bradford City played a Rangers XI comprising players who had represented that club during the course of winning ten successive Scottish League titles. It was a truly memorable occasion that allowed supporters of both clubs the opportunity to pay respect to a great guy who will always be welcome at Valley Parade. Stuart played one half of that game for City and the other for Rangers and he donated part of his proceeds to the Bradford Burns Unit.

On these occasions the match programmes have provided a break from the regular design of that season’s issues. The Podd and Downsborough testimonial programmes for example were of much higher standard than the contemporary league programmes and were relatively groundbreaking for their photographic content.

Ces Podd was the first black player in the Football League to earn a testimonial and the game against an All Star Black team at Valley Parade raised a then club record sum of £5,147 for a testimonial. On the other hand John Hall’s testimonial in May,1974 was commemorated with a single Banda-copied teamsheet – hardly something to share with his grandchildren!

John’s book A HISTORY OF BCAFC IN OBJECTS (vol 1 in the BANTAMSPAST HISTORY REVISITED series) provides background about City memorabilia. It is available from Waterstones, Wool Exchange or Salts Mill bookshops or follow the link below for BANTAMSPAST HISTORY REVISITED. In future issues of The Parader he will feature objects that tell the history of the club. If you have a City artefact in your possession that you would like him to feature in the programme contact him at johnpdewhirst at gmail dot com or tweets @jpdewhirst

My most recent article on VINCIT tells the long forgotten story of Shipley FC.

Elsewhere on this blog you can find his programme articles from earlier games this season and last. Scroll down to find a summary of other features uploaded to the blog in 2018.

A new feature on archive images

*** For any Scunthorpe United supporters reading this blog, the author was the person who designed your Unity Fist badge in 1981 as detailed in The Beautiful Badge. ***