For the avoidance of doubt this is a personal blog, not a news site…

Of all the nations in Europe it is Germany that has fascinated me the most, probably because what has happened in Germany in the last 150 years has had a massive bearing on the history of Europe and Great Britain. The German community in Bradford between the middle of the nineteenth century and World War One was no less a product of what was happening in Germany. The so-called German Problem dominated international relations and so it would seem, another German Question dominates the discussion of Bradford City supporters. It is all rather surreal to anyone who followed the club before the Premier League era that our dear institution would be the target of foreign ownership in 2016. Nearly three years later it seems to be ending in tears.

I have spent quite a lot of time in Germany and Berlin in particular. I have also had some exposure to German football, albeit mainly of that in the former GDR. On my part I consider myself something of a Germanophile and was among those who welcomed the acquisition of Bradford City by Stefan Rupp and Edin Rahic. I saw them as good for the club, capable of driving a transformation at Valley Parade both on and off the pitch.

In contrast to the UK, when it comes to business the Germans have distinct cultural traits but ultimately I have found them to be thorough and pragmatic in their approach. Any criticism levelled at the speed of decision-making is countered by the fact that they are typically more focused on longer term gains than tends to be the case with Anglo-Saxon investors. Neither is wrong or right, it comes down to the circumstances and mutual understanding.

With regards to football, the Germans also have their own ways and no-one can argue otherwise that it tends to be successful. With regards club football, thirty years ago German supporters were derided by the English as sausage chompers recognisable by the mullet hairstyles and denim waistcoats adorned with badges. Nowadays they are much less fixated with English fandom and attempts to imitate the example of the Anfield Kop. Quite the opposite in fact because if you compare the atmosphere of Bundesliga games with that of the soulless grounds of the Premier League, the Germans are definitely not to be ridiculed.

I have visited Berlin on numerous occasions on an irregular basis since 1983 and found it fascinating to track the changes. I spent quite a bit of time there as a student and might have remained had I accepted the offer of a job in the then GDR in 1986. At the time it was a difficult decision because the terms seemed too good to be true for a recent graduate but I did the right thing to turn it down and after the fall of the Wall (in 1989) I discovered that I would have been in the employ of the Stasi. What I find amusing is that East German intelligence interpreted the City Gent and flag graphic (introduced by myself to the cover of The City Gent in 1986) as indicative of revolutionary aspirations and the likelihood of being ‘a fellow traveller’.

Going back to my time in East Germany I saw a number of football games and had a particular affection for 1FC Lokomotive Leipzig, producing the spoof fanzine ‘Und Nun Voll Dampf‘ (translated: ‘And Now, Full Steam‘). One club that fascinated me was 1FC Union Berlin that played its games in Kopenick, (east) Berlin. Union was a mainstay of the GDR Oberliga, rivals of the favoured Dynamo Berlin who enjoyed the patronage of leading figures in the SED ruling regime.

During the 1980s football came to represent an outlet for youth disaffection and restlessness in the GDR and I suspect that the regime considered football rivalry to be a way for young men to let off steam. The gang violence I witnessed at a game in Leipzig was far more vicious than anything I saw in England in the 1980s and yet nothing of the phenomenon was ever reported in the British media.

Although I saw Union play in Leipzig I had never watched them play in Berlin and as one of those bucket list items I finally made amends at the weekend. The experience was a reminder of how football can be an engaging, compelling experience. From the display of flags and scarves to the sheer noise, the atmosphere at the quaintly named Stadion An der Alten Forsterei takes some beating (translated ‘by the old forester’s house‘ – it is literally situated on the edge of a forest). The stadium has a capacity of 22,000, seated accommodation for just under four thousand with covered terraces on three sides. It is a stadium that the club’s supporters helped to construct themselves and it has a homely, utilitarian feel about it. Union is a family friendly, inclusive club closely connected with its community and the pride and passion of its fans is genuine. At the time of writing the club is unbeaten, challenging at the top of Bundesliga 2 and playing in front of near capacity crowds. For a club that has struggled financially in the aftermath of German reunification it is a heartening recovery, testament to the commitment and faith of its supporters. 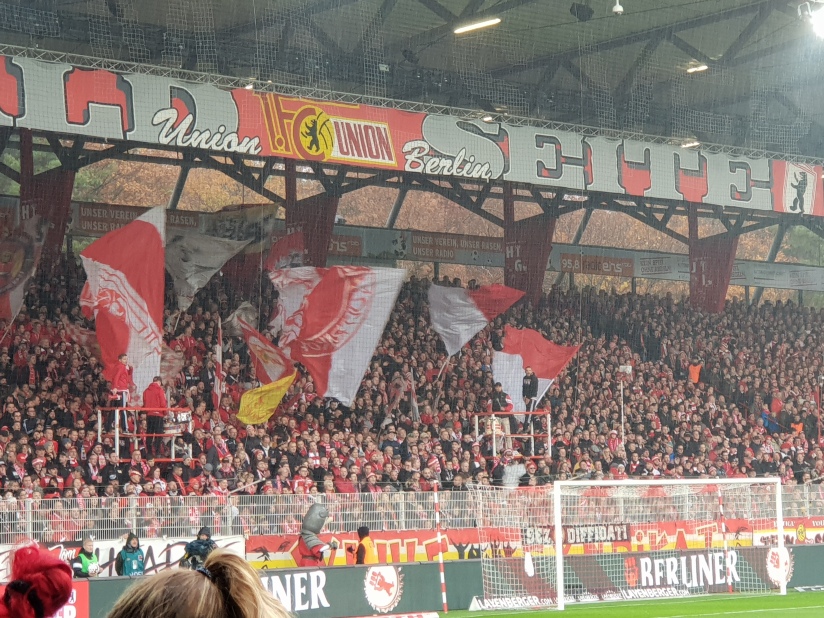 I couldn’t help but feel a number of parallels with Bradford City, a similarly unfashionable club that has struggled against financial constraints and been reliant on its supporters to overcome obstacles. The same passion on the terraces of Stadion An der Alten Forsterei existed at Valley Parade not that long ago. I came away believing that Union Berlin provided inspiration for what could be achieved at Valley Parade, a demonstration that the German example has relevance to us. It was a further reminder of the vitality of a club with strong local roots and identity as identified in Jason McKeown’s new book, Who We Are.

(NB Whilst the terraces and the beer played a big part in building the atmosphere at Union, the big difference was that the noise tended to be orchestrated by cheer leaders rather than the more spontaneous chanting of which we are familiar.)

Thus far, talk of the ‘German way‘ at Valley Parade has been restricted to coaching and youth development. The efforts of Edin Rahic will be best remembered for relaying the pitch at Valley Parade and there is precious little evidence of transformation elsewhere. All the more remarkable has been the failure to encourage the German crowd experience at Valley Parade and initiatives introduced prior to the change of ownership at the end of the 2015/16 season seem consigned to history.

What is to be done? Last week I was a signatory to an open letter published on Width of a Post urging supporters to back Julian Rhodes, something that prompted a passionate debate as well as personal criticism on Twitter. Anyone who reads my tweets (@jpdewhirst) will be aware that I have had my supporter credentials questioned and somewhat incredulously I have been described as an apologist for the affairs at Valley Parade by one individual who has sat on the fence about the Rahic issue until fairly recently. Another has even accused me of not attending games but needs to know that I am unlikely to see him at Valley Parade because I don’t frequent the hospitality lounges and have no interest in business networking or wearing a suit at football matches. If anyone needs to know when I am at Valley Parade, mine is the Triumph Bonneville parked in the motorcycle area at the back of the main stand (with the exception of when it pours down).

Another angry tweeter (who was vociferous until around Easter telling the world about how lucky we were to have Edin Rahic at Valley Parade) tells me that I am out of touch with working class supporters. Sorry, this has nothing to do with social class. I am not ashamed to say that my proletarian credentials evaporated two generations ago but it doesn’t make me any less a City supporter. I am a Bradford man first and foremost and proud that I can trace my family history back two hundred years to pre-industrial Bradford. I genuinely don’t believe that I have anything to prove about the validity of my credentials as a City supporter. My concern first and foremost is the football club and I have as much of an emotional commitment to Bradford City AFC as anyone else. What I want is to safeguard the future prospects of the club as a Bradford institution and that brings me to why I travelled to Bavaria from Berlin yesterday.

Notwithstanding that I might be seemingly out of touch with the common man, I enjoy a degree of credibility with the decision-makers at Valley Parade and I understand business. I have been in contact with Stefan Rupp since February this year and reached out to him last month to meet him. Eventually this was arranged at Munich Airport on Monday 12th November (and for the record, the meeting was confirmed ahead of Julian Rhodes being appointed as a consultant at Valley Parade). I know that Stefan reads Width of a Post and not surprisingly follows the affairs at Valley Parade online. The purpose of our meeting was with the future of the club in mind, to allow me to convey the concerns of supporters and in turn, to understand his perspectives.

Let me put on record that I like the guy who is down to earth and without pretensions. For want of a better term, he is something of an enigma to City supporters and he confessed that his preference is to avoid publicity. What I wanted to do was build a degree of trust and understanding with him to allow a frank and open exchange between us. I conveyed my observations in no uncertain terms and he listened. I am not going to betray any confidences but I have peace of mind that he understands the need for change. Equally important, he has assured me that he will stand by the club financially to avoid any prospect of cash crisis or insolvency.

No doubt there will be people who read this and express scepticism but if I did not believe him I would not be going on record with these comments. I am independent minded and in no-one’s pocket; my tweets and the articles / book reviews published on this blog should confirm that I don’t suffer fools. I have also told Stefan Rupp that I will give my time to work with Julian and other staff members at Valley Parade should it be required – I hasten to add in a financial management capacity and not on the football side. For those who declare the need for action maybe ask of yourselves. All I can say is please get behind Julian’s efforts and things will take care of themselves.