A HISTORY OF BCAFC IN OBJECTS

As if no other reminder was necessary, the beginning of the Premier League season is invariably heralded by the sale of Panini football stickers in newsagents. With the notable exception of 1999/00 and 2000/01, this has been a phenomenon that has bypassed Bradford City. Yet Bradford can boast having played a big part in the origins of these football collectables. Indeed, long before Pannini stickers had become a multinational business, a local printing business in Oak Lane, Heaton had derived its own profits from the sale of what became known as ‘Baines cards.’ 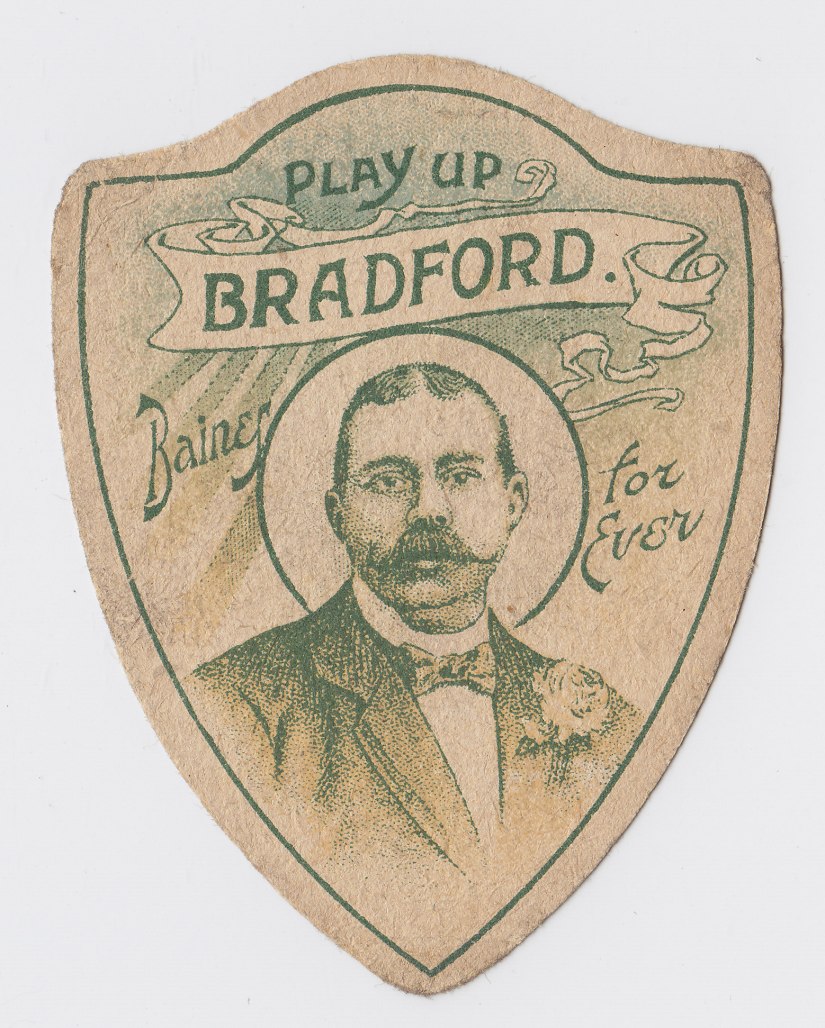 The launch of these collectables in 1885 came at the height of the rugby boom in West Yorkshire and in Bradford in particular. At the time Manningham FC was emerging as a challenger to Bradford FC (who were based at Park Avenue) and this was considered something of a sporting sensation such had been the reputation of the senior side. It was the club’s growing confidence that encouraged Manningham FC to relocate to Valley Parade from Carlisle Road in 1886.

The launch of the Yorkshire Cup in the 1877/78 season had been the catalyst of local public interest in rugby union and indeed, the rivalry between the Manningham and Bradford clubs was based around the cup competition. In 1884 Bradford had won the trophy, having defeated Manningham in an earlier tie. In 1885 there had been the prospect of a Worstedopolis final but Bradford FC was defeated in its semi-final. Although Manningham FC reached the final, the club was defeated and unable to emulate the achievement of its Park Avenue rivals twelve months before. The following season Bradford defeated Manningham in a quarter-final tie only to lose in the 1886 final. Later it was the controversial postponement of a cup tie between the sides in March, 1887 that defined relations between the Valley Parade and Park Avenue organisations for the next twenty years (the background to which is told in my book ROOM AT THE TOP).

Not surprisingly, the rivalry between the clubs and popular interest in rugby provided a febrile environment for John Baines to launch his initiative. His patented football cards were initially based around sides from the north of England as well as Scotland in fairly standardised formats. By the 1890s they had extended to coverage of teams in the south as well as Ireland, including soccer and cricket. In 1893 the business relocated to 15 North Parade and by this stage faced competition from another Bradford printer, W N Sharpe which responded with its own range of ‘Play Up’ cards. It was a buoyant market and in 1920 for example it was claimed that 13.5 million cards had been produced by Baines that year. Finally, in 1926 the enterprise was sold to a Barnsley firm although by this time cigarette cards were capturing the appeal of collectors.

Elsewhere on this blog you can find his programme articles from earlier games this season and last. The site has recently been refreshed and new postings in the last week include book reviews – refer menu links.