Cigarette cards, or ‘stiffeners’ had their origin in the USA with a functional purpose to reinforce the packaging. Their potential as a marketing tool was recognised and they were distributed by tobacco companies to promote their products as well as to enforce brand loyalty and repeat purchase. From 1887 British tobacco companies such as W.D. & H.O. Wills, John Player & Sons and Thomas Ogden started issuing themed cards featuring an eclectic mix of subject from military uniforms, flags and ships through to sportsmen. By the time of the formation of Bradford City in 1903 the practice was already well-established. The set of football cards issued by Ogdens in 1906 which depicted footballers in their club colours was one of the first full-colour series.

The emergence of Bradford City as a successful and relatively well supported team, particularly after promotion to Division One in 1908 and through to 1915, meant that its players were well represented in releases during this period. Indeed City players were included in a number of what are now considered classic football card series. Not surprisingly, as the club’s fortunes declined during the inter-war period (with relegation to Division Three (North) by 1927 for example) there were much fewer cards featuring Bradford City teams or players.

The earliest cigarette cards to feature City players were issued during the 1907/08 season. There were four different series including Prominent Footballers by Taddy &Co (repeated again in 1908); George Robinson in the Football Captains series by Cohen Weenan and William Foulke in the Owners, Jockeys, Footballers, Cricketers series by Cohen Weenan. Additionally, the WD & HO Wills Football Colours series featured BCAFC among the 50 selected clubs.

The celebrity status of goalkeeper ‘Fatty’ Foulkes (who weighed in excess of twenty stone) led to his selection in the 1908 series Famous Footballers by Ogden’s Tobacco Co (in which there were 50 different players). 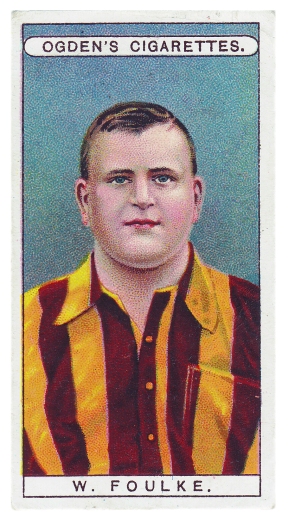 In February, 1907 City played Accrington in the FA Cup Second Round at Valley Parade. The colour of the visitors’ shirts clashed with that of William Foulkes who wore a red jersey. It is reported that a change could not be found for him so a white sheet was wrapped around his waist. On the basis that the tie was won 1-0 and Foulkes did not concede a goal it has been suggested that this was the origin of the term ‘keeping a clean sheet’. 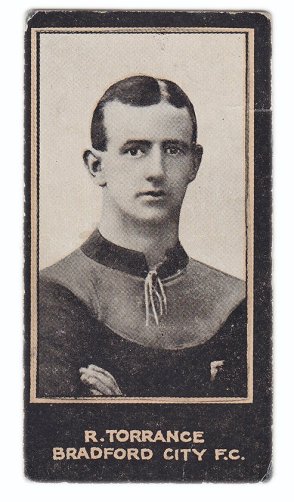 Anyone interested in buying early City memorabilia will find cigarette cards on ebay where they are plentiful and in comparison to old programmes, much cheaper and better value. There are many examples of players from the period immediately preceding World War One when the club was challenging at the top of Division One such as that of Bob Torrance above.

1909 BDV silk featuring ‘bantams’ inspired yoke shirt   The yoke shirt was introduced in 1909 and famously worn in the FA Cup final of 1911. It was used during the 1920s and arguably became recognised as the club’s signature strip. It was reintroduced in January, 1949 by the newly formed Bradford City Shareholders’ and Supporters’ Association as a rallying call to revive the fortunes of the club – at that time struggling at the bottom of Division Three (North). I’d be all in favour of such a heritage shirt being revived in 2019 for similar purposes.

The drop down menu above provides links to previous programme articles, archive images, book reviews and features on the history of Bradford sport that I have written. Lots of accessible, freely available history with the assurance of it being thoroughly researched!

My book A HISTORY OF BCAFC IN OBJECTS (vol 1 in the BANTAMSPAST HISTORY REVISITED series) provides background about City memorabilia.

In issues of The Parader I feature objects that tell the history of the club. If you have a City artefact in your possession that you would like me to feature in the programme contact me at johnpdewhirst at gmail dot com or tweets @jpdewhirst

I have written widely about the history of sport in Bradford: Links to my features on the history of Bradford sport
Published on PLAYING PASTS in Feb-19: Football clubs and how they fail. (I am presenting a paper on the same theme at the International Football History Conference in Manchester in June, 2019.)