Thanks for visiting my blog! [Home page] This post provides links to articles I have written about the origins of sport in Bradford, the development of commercialised sport in the nineteenth century and the early history of cricket, rugby and soccer in Bradford.

I am a longstanding supporter of my local club, Bradford City and have an extensive collection of football memorabilia.

My interest in sports history has been shaped by a number of influences but principally stems from a fascination with the history of Bradford, its industrial and urban development as well as its social history. I have collected football artefacts as a means of connecting with the past and strongly believe that history – and indeed the history of sport – can be told through objects. Having studied economic history at university, and as an accountant specialising in undertaking business reviews and providing support to off-plan businesses, I also have a particular interest in the evolution of sport as an industry in itself.

These themes are evident in my most recent books which seek to examine the history of football clubs as commercial organisations, to understand how financial circumstances in the past dictated decision-making and outcomes. My books also feature a wealth of historic memorabilia illustrated in colour as a means of making relics accessible to a wider audience.

I was co-founder of The City Gent (Bradford City) fanzine in 1984. I have authored four books on the history of Bradford football and the origins of sport in the district and been involved in the production of five others. I am currently writing a history of the Bradford City / Park Avenue rivalry which will be the sixth volume in the BANTAMSPAST ‘History Revisited’ series. (NB Another title featuring sport in nineteenth century Bradford is also planned, details to be announced later.) You can find details of the books on this site from this link. Copies of A HISTORY OF BRADFORD CITY AFC IN OBJECTS, ROOM AT THE TOP and LIFE AT THE TOP are still available and can be purchased direct from the publisher, BANTAMSPAST, PO Box 307, SHIPLEY BD18 9BT price £20 each including postage (cheques payable to BANTAMSPAST).

I have contributed a series of articles to the Bradford City AFC programme during the 2017/18 season and these are published on this site. They feature varied themes from the origins of soccer in Bradford  / the Boar’s Head identity / the influence of the military on sport in Bradford / the origins of Valley Parade and its early development / the story behind how BCAFC became known as the Bantams and various topics relating to the history of both City and Bradford Park Avenue.

Also published on this site are a number of other varied articles, from the history of railways in Bradford to the story of Harry Garnett of Bradford FC (also a former RFU President).

I have written a number of articles about the origins of Bradford sport which have been published variously on the following websites:  PLAYING PASTS and VINCIT, an online journal of Bradford Sport History as well as The World Rugby Museum website

These, as well as planned future articles, are summarised below.

The role of social networks on the early development of football

The origins of professional football in Bradford

What’s in a name? Semantics about Bradford City and Park Avenue

Other articles are scheduled in coming months on the following subjects:

In June, 2018 I am presenting a joint paper with Professor Wray Vamplew at the City Football Academy, Manchester examining the transformation of sport from a recreational activity to an entertainment business, specifically with regards to the experience in Bradford and Glasgow. This will form the basis of two planned academic papers to be published later this year.

ROOM AT THE TOP and LIFE AT THE TOP provide a detailed account of how football – both rugby and soccer – became commercialised in Bradford and provide what may be the first business history of English rugby clubs.

On 19 May, 2018 I am giving a presentation at Bradford Library to talk about the origins of sport in Bradford, covering cricket, rugby and football and the early history of sport in the town. I will also be answering questions about my recent books. 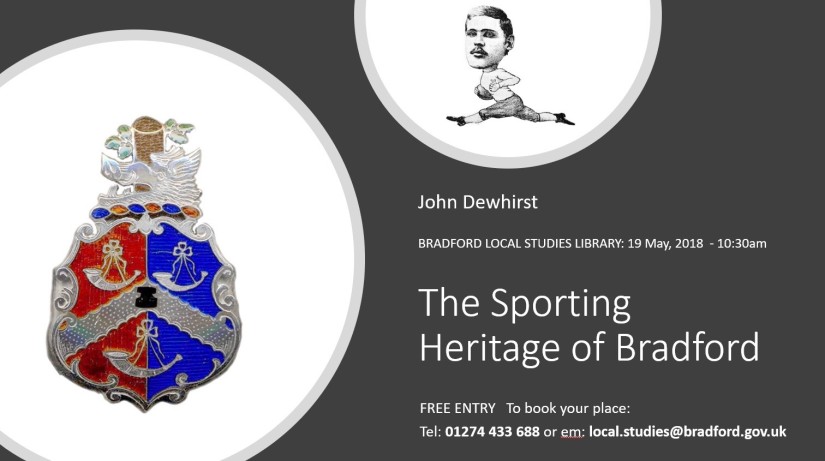