Younger supporters struggle to comprehend that until 1970 there were two Football League clubs in Bradford. As will be told in my forthcoming book Wool City Rivals, it defied financial gravity that Bradford could support both clubs for so long and there is little prospect of the phenomenon ever being repeated. The existence of two senior sides in Bradford undermined the finances of each and goes a long way to explain why neither City nor Bradford were particularly successful. (Older fans will remember that it was the Park Avenue club who were known as Bradford and the contemporary abbreviation of Bradford City to ‘Bradford’ is not one of historical validity.)

Although a reformed Bradford Park Avenue club was established in 1988 (and now plays at Horsfall), little remains of the original ground at Park Avenue as a reminder of its place in Bradford sports history. Opened in 1880, Park Avenue was intended as a multi-activity venue for cricket, athletics and football. The bottom third of the site staged rugby until the so-called ‘Great Betrayal’ in 1907 and thereafter soccer. After 1908 it hosted Football League fixtures (and from 1970, Northern Premier League games) but was abandoned in 1973 and then finally demolished in 1980.

Park Avenue was a popular venue and arguments persisted that it was the better soccer stadium in the city. Certainly it was a ground with character albeit one that was constrained in terms of its footprint which would have restricted options for modern redevelopment. Even in its prime, Park Avenue had a lower capacity than Valley Parade and the respective record attendances were 39,146 (1911) and 32,810 (1944).

The final demise of the Bradford (PA) club was pitiful and during its last three seasons in the Football League it managed no more than 15 wins. After finishing second from last in 1966/67 it was rock bottom of the fourth division between 1967/68 and 1969/70. The club relied upon the ‘Old Pals’ Act’ to be re-elected until eventually other clubs lost patience and in June, 1970 Bradford was replaced by Cambridge United.

Of those 15 League victories during the final three seasons in the Football League, only one was secured away from home and the last time that Bradford (PA) won away was on 10 February, 1968. However the 50th anniversary is unlikely to be celebrated at Valley Parade because against the run of form, Avenue defeated City 2-1. It proved to be the club’s last win of the season. City, who had been top of the division, dropped to third and in the end missed promotion by a single point.

The derby fixtures were keenly awaited by supporters of both sides and this particular game was attended by 11,513. By contrast the average crowd for City’s other home games in the fourth division in 1967/68 was only 7,152. 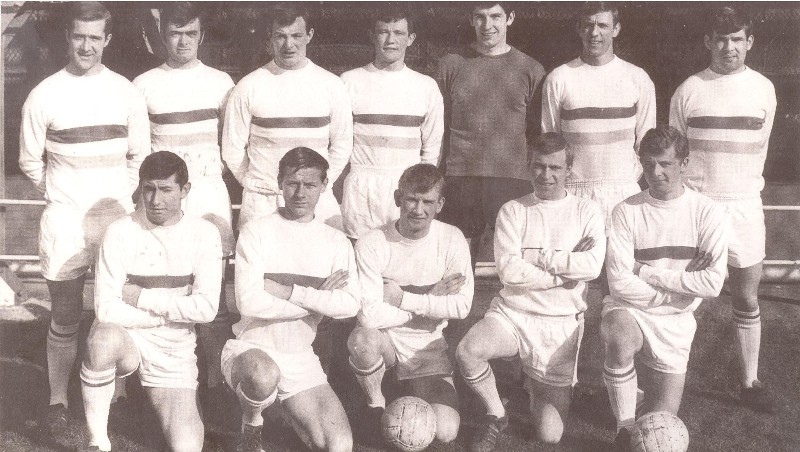 Out of 52 contests in the Football League, City won 20 and Avenue 21. In November, 1968 the final derby at Valley Parade resulted in a 1-0 home win and the last ever derby at Park Avenue the following January was a 0-0 draw. The Bradford (PA) club was liquidated in 1974 after a final season ground-sharing at Valley Parade. Subsequent to its demise a good proportion of the remaining supporters opted to follow clubs other than Bradford City such was the ill-feeling.

To keep the memory of the City / Avenue rivalry alive my new book will feature surviving relics and artefacts of the two clubs and I appeal to anyone who has (pre 1970) memorabilia to help me make this a comprehensive record for posterity. It is not going to be an art school project and the book will be produced in the same style as the earlier title, A History of BCAFC in Objects.

Thanks for visiting my blog. Apart from publishing my BCAFC programme articles I also upload occasional articles of historical interest. Scroll down for details about my books in the BANTAMSPAST History Revisited series which tell the history of sport in Bradford – and in particular football. The books seek to explain why things happened as they did instead of simply recording what occurred and readers may be surprised at the extent to which they contradict many of the myths and superficial narratives that have circulated previously. You won’t get fancy art school graphics but you will find substance and historical accuracy in the content. Of course if you prefer an abundance of pictures accompanied by text written for a Year 5 schoolchild you’ll find them ball-achingly boring. Tweets @jpdewhirst
————————————————————————————–—

If you are interested in Bradford sport history visit VINCIT: https://www.bradfordsporthistory.com

On Saturday 19 May, 2018 I am giving a talk in the Bradford Local Studies Library on the origins of spectator sport in nineteenth century Bradford and the development of the city’s sporting culture and identity. This will cover principally cricket, rugby and football and include a Q&A session.