Today – 1st September 2019 – was an historic day for Bradford sport. Bradford Bulls played Sheffield Eagles in what was billed as the final game of professional rugby at Odsal Stadium thus marking the end of an 85 year tenure and with it questions about where the club will play next. Given the historical significance I headed to Odsal with my camera and a wide angle lens to record the occasion for posterity.

Although I am not a Rugby League fan the Odsal saga has long fascinated me. This is not due solely to the ground’s significance in the history of professional football in Bradford, but because on a number of occasions it seemed that Bradford City AFC might relocate there. Thankfully it has never come to pass that Odsal became a permanent home for the Bantams. Indeed, Odsal is not a ground that I have particularly enjoyed visiting and between 1985-86 I was active in campaigning with other City fans against the prospect of our club abandoning Valley Parade in favour of Odsal.

The layout of the current stadium is pretty much the same as that developed ahead of the 1985 Speedway World Championships with the exception of the hospitality block at the southern end, constructed between 2001-03. The speedway track has long since been covered in tarmac and there is little trace of speedway remaining.

This was my first visit to Odsal in nearly five years and I confess that I was surprised at the extent to which the ground is run down. It is evident that there has been minimal maintenance and repair undertaken in recent years. Whilst it is by no means derelict to the extent of the disrepair at football grounds in the 1980s, it is a long way from the standard you would nowadays expect even at clubs in the basement of the Football League. It seems pretty clear that the stadium has no future. Just about the only feature in the ground’s favour is the standard of its PA system (which is very loud) – take that away and it really would be a soulless place. The bank of terracing at the northern end of the ground (as below) is condemned and entry forbidden but recent crowds have been insufficient to justify upgrading even if the cost could be afforded.

What also shocked me is the extent to which the Bradford Bulls set up is a pale shadow of the glory era. It reminded me very much of the state of Bradford sport in the 1970s when all three Bradford clubs were on their knees. The collapse of Bradford Bulls is lamentable and sad but this is not the place to apportion blame.

The RFL has reportedly made the Bradford Bulls subject to ‘special measures’ and it doesn’t take much to guess the concerns of the sport’s governing body. On the basis of what I saw today it is fanciful to believe that the Bulls could finance a new stadium and it wouldn’t come as a surprise to me if the next headlines were downbeat about the club’s future options. 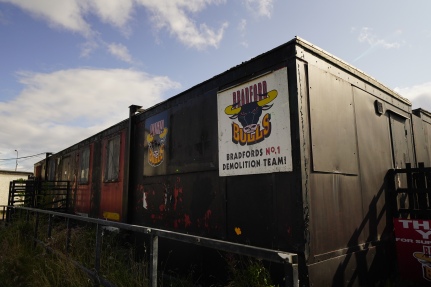 The following photographs have been uploaded in chronological order, consistent with my wandering through the stadium. They record the quirky features of the ground, the multitude of portakabins and the Anderson shelter inspired toilet blocks. It was a day of big skies and Odsal was certainly the place to watch the clouds. Bradford Bulls defeated Sheffield Eagles 30-10 and the crowd was reported as 7,531. Unfortunately other results meant that the club failed to secure a final play-off place which could prove to be decisive in the short term.
As regards what happens next, there will be plenty more cloud gazing to come… 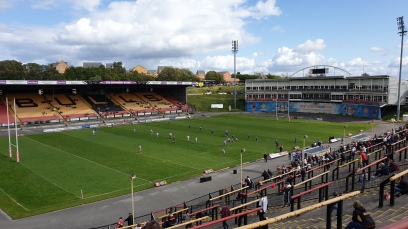 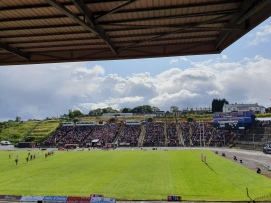 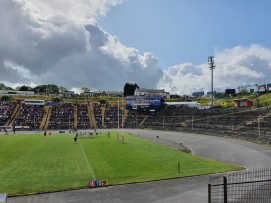 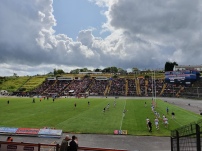 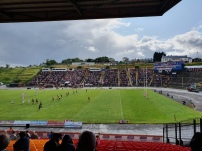 You can find archive images of Valley Parade and soon to be added images of Bradford City AFC at Odsal in 1986 from this link.

To read features written by the author about the early history of rugby / soccer and the origins of sport in nineteenth century Bradford go to this link.

For details about my books on the origins of rugby in Bradford and the early history of Bradford FC and Manningham FC go to this link. I am currently working on a history of the City / Avenue rivalry, 1908-74 which will include previously overlooked detail of the origins of the Rooley Avenue / Odsal Stadium just over 90 years ago.

If you are interested in the history of Bradford sport: VINCIT, the online journal of Bradford Sport History.

PS I have no objections if people wish to download any of the images on this page but I would ask that I am credited.