Mention of Cambridge United in the context of Bradford football history brings to mind the fact that the Cambridge club was elected to the Football League in favour of Bradford Park Avenue in 1970. Another connection with our former rivals is the FA Cup tie between those sides in a second round tie in December, 1953. Avenue’s 2-1 away win allowed them to progress to the next round, a tie against Manchester City at Park Avenue that attracted a 22,000 crowd which provided a much needed financial boost. 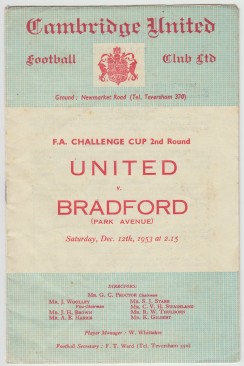 Like Oxford United, Cambridge United was not the traditional town club in the respective city. During the 1960s it was Cambridge City FC that was considered the stronger and more likely to achieve Football League status than Cambridge United who were known as Abbey United between 1912-51.

The first competitive game between Bradford City and Cambridge United was in October, 1972 at the Abbey Stadium with the return game at Valley Parade the following March. It was in fact our first season back in the fourth division after relegation the previous May and by way of comparison the crowd at Cambridge was 3,960 and that at home was 5,031. The 1976/77 season would prove the last that we played each other at this level, Cambridge United promoted as champions and ourselves in third position.

My own particular memory of Cambridge United is that of our visit in April, 1985 when a 4-0 victory made pretty much certain that we would be promoted to the second division. 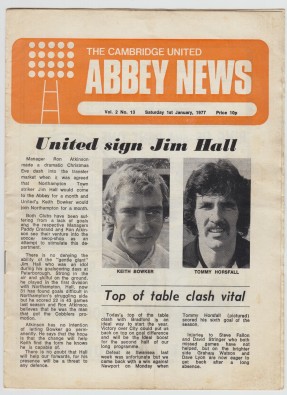 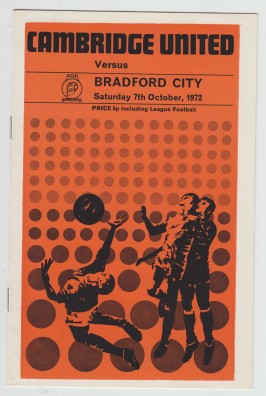 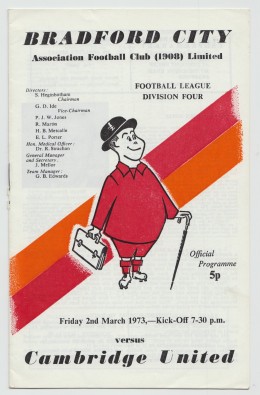 Pictured are the away programmes from 1972/73, 1976/77 and 1984/85 as well as that of our first meeting at Valley Parade and the FA Cup programme involving Bradford Park Avenue.

You will find other Bradford City archive images by following the links in the drop down menu above. Also published on this blog are my features in the BCAFC programme from previous seasons, book reviews and sundry content about the history of Bradford sport.

On this blog you can find features about the origins of the club identity, crests and nickname.

The drop down menu provides links to other features I have written published elsewhere including on VINCIT, the online journal of Bradford sport history

Details of my books.