Rumours of new developments at Odsal: Superdome? Wembley of the North? An end to the Ice Age and Odsal micro-climate? Groundsharing with Bradford Park Avenue and rugby union?

With rumours that Bradford Park Avenue are looking to groundshare at Odsal next season, it represents another twist to the history of Bradford football.

Prior to 1907, rugby had been played at Park Avenue but with the Great Betrayal of that year and conversion to soccer, a new club – Bradford Northern RFC – was formed to allow Northern Union to be continued to be played in the city. That new club initially played at Greenfield, Dudley Hill before moving to Birch Lane in 1908 to play on the ground of the former Bowling Old Lane FC. In 1934 Bradford Northern moved to Odsal.

During the 1940s and 1950s there were various suggestions made that Odsal might be developed as a municipal stadium to accommodate a merged Bradford soccer club alongside Bradford Northern. Nevertheless (as will be told in my forthcoming book about the City / Avenue rivalry) at no stage did either Bradford City or Park Avenue have any plans to do so and it is a complete myth that before the last war the Park Avenue chairman Stanley Waddilove had formal proposals for soccer to be played at Odsal.

By the end of the 1960s Bradford Corporation had become impatient and frustrated with the expense and upkeep of Odsal such that after Bradford Park Avenue had failed to gain re-election to the Football League in 1970 the Corporation actively looked at alternative options. A number of schemes were proposed but when Stafford Heginbotham refused to countenance the possibility of Bradford City moving to Odsal or for that matter, to Park Avenue the pressure was put on the rugby club to move to Park Avenue. By 1975 however Park Avenue was already semi-derelict and it was reported that Bradford Northern could not afford the cost of upgrading the ground where its predecessor had played between 1880-1907. (NB The more plausible explanation for what happened will be revealed in my book.)

Bradford Northern and Bradford Bulls have both played games at Valley Parade but never at Park Avenue. Bradford City played at Odsal after the fire disaster but never staged a home game at Park Avenue. In 1907 the City members famously rejected the option of amalgamation and relocation to Park Avenue, a sentiment that dictated attitudes in the last century.

After vacating Park Avenue in 1973, the original Bradford Park Avenue AFC played a final season at Valley Parade. Now there is the possibility that they will become the first of the Bradford sides to have played on each of the three Bradford grounds – and Horsfall Stadium as well.

For Bradford Bulls, a ground-sharing arrangement makes economic sense to derive better utilisation of Odsal. From the perspective of Bradford Park Avenue they desperately need to improve attendances if they are to fulfil a somewhat ambitious plan of returning to the Football League. Odsal may therefore help attract new spectators but even if average gates double to 700 they will hardly test the stadium’s capacity. Whether the Odsal pitch will prove more resilient than Horsfall and prevent as many games being postponed is anyone’s guess. (Another rumour hints at a synthetic pitch being installed and Odsal also staging professional rugby union …)

And so for the first time since 1973/74 comes the prospect of a ground-sharing arrangement in Bradford (City’s sojourn at Odsal being a distinctly temporary affair in 1986). I wouldn’t rule out the possibility that one day in the future Bradford City might be involved in some form of ground-share, maybe even at a new stadium. In the meantime it will be fascinating to watch developments at Odsal and all I can say is that I’m glad it’s not City who will be playing there. 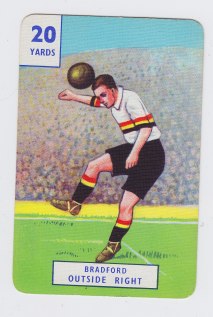 Given the common ancestry of Bradford Bulls (a name change from Bradford Northern in 1996) and Bradford Park Avenue it would be fitting for the latter to revive its traditional red, amber and black colours as first choice team strip in place of green and white. That however is another emotive debate!

POSTSCRIPT: Bradford Park Avenue remained at Horsfall Stadium during the 2018/19 season, presumably having been unable to agree terms with Bradford Bulls or maybe because they just couldn’t face going to Odsal!

Thanks for visiting my blog. Scroll down for details about my books in the BANTAMSPAST History Revisited series which tell the history of sport in Bradford – and in particular football. The books seek to explain why things happened as they did instead of simply recording what occurred and readers may be surprised at the extent to which they contradict many of the myths and superficial narratives that have circulated previously.

If you are interested in Bradford sport history visit VINCIT: http://www.bradfordsporthistory.wordpress.com

On Saturday 19 May, 2018 I am giving a talk in the Bradford Local Studies Library on the origins of spectator sport in nineteenth century Bradford and the development of the city’s sporting culture and identity. This will cover principally cricket, rugby and football and include a Q&A session.